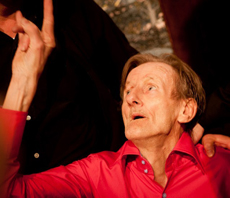 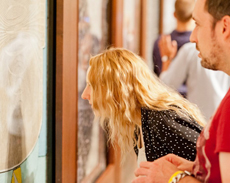 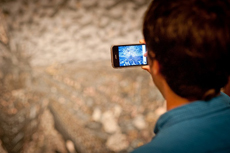 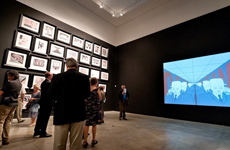 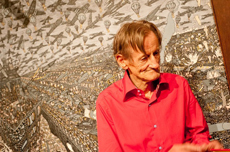 This evening, His Excellency Mr Kim Traavik, Norwegian ambassador to the United Kingdom, opened the ‘Pushwagner: Soft City’ exhibition at MK Gallery in Milton Keynes. To welcome visitors, the artist had designed a cavernous mouth to transform the facade of the building.

The show is Pushwagner’s first solo exhibition outside of Norway, and brings together drawings, paintings and prints made over the last forty years, including the original drawings for his defining creation, the graphic novel Soft City, which encapsulates a generation’s disenchantment with capitalism and life in the modern city.

MK Gallery director Anthony Spira invited Pushwagner to show his work in Milton Keynes after seeing it at the Berlin Biennial in 2008.

‘I felt there was a particular aptness about his work being shown in a city established at roughly the same time as Pushwagner was creating these works’, he said. ‘And [Milton Keynes’] utopian ideal and grid square design has some visual affinity with many of his works.’

Art / Books is proud to be publishing a monograph on the artist to accompany the exhibition, which tours to the Vestfold Haugar Kunstmuseum in Tønsberg, Norway, in September, and then to the Museum Boijmans Van Beuningen in Rotterdam, The Netherlands, in February 2013.

Read the BBC News website report on the opening