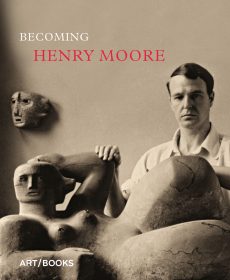 On the jacket: Henry Moore with Reclining Figure from 1929, photographed in 1929 or 1930. Copyright © Henry Moore Foundation Archive, courtesy of Leeds Museums and Galleries.

Accompanying an exhibition of the same name, Becoming Henry Moore tells the story of the artist’s creative journey between 1914 and 1930, from gifted schoolboy to celebrated sculptor. Displaying artistic skill and ambition from a young age, Moore spent his early years studying the art of the past and of his contemporaries, absorbing a wide variety of sculptural ideas and forms as he developed his own individual and now iconic style.

In this beautiful, richly illustrated book, Sebastiano Barassi presents a lively account of this formative period, from Moore’s time at Castleford Secondary School, where his talent was first spotted, through his active service in the First World War and student life at Leeds School of Art, and culminating with his move to the Royal College of Art in London and subsequent entry into the world of contemporary sculpture. What is revealed is a rich story of friendships, mentors, and collectors, and a range of artistic influences, from classical and non-Western art to Renaissance and modern masters and dialogues with other leading figures from the British and European avant-gardes. Moore’s encounters with collections both public and private and the importance of ancient art in his development are brought to life by contributions from Tania Moore and Jon Wood, who show not only how these experiences were critical in the formation of the artist’s early style, but also how they continued to inform his work for the rest of his career.

Richly illustrated with sculptures, drawings and photographs from his life, and including a chronology of the early years, this book shows the myriad influences at play as Henry Moore took his first steps on the path to becoming Britain’s foremost modern sculptor.