All images from On Being An Artist. Photographs of the artist by Jorge Lewinski (1974) and Caroline True (2014). Works by Michael Craig-Martin courtesy the artist and Gagosian. 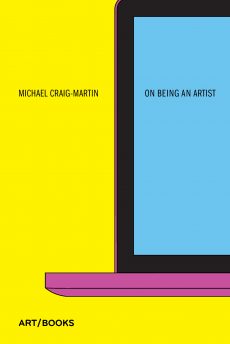 On the cover: Artwork by Michael Craig-Martin (2014)

‘One of the best books of an artist’s writings in years: elegant, pithy and full of insights’ — Sir Nicholas Serota, Chair, Arts Council England and former Director, Tate
‘Coherent, absorbing … such a compelling read … Craig-Martin writes brilliantly’ — The Art Newspaper
‘[An] absorbing and important book … a must-have for anyone with the slightest interest in today’s art scene’ — Telegraph, Best Art Books of 2015
‘Extraordinary … positively quakes with brilliance … Brimming with intelligence, Craig-Martin’s book gathers a lifetime of artistic wisdom.… Since finishing [it] I do nothing but recommend it.’ — Art Monthly
‘Erudite, insightful and hugely readable … an intelligent, entertaining and inspiring journey into the mind of one of the leading artistic figures working today’ — It’s Nice That
‘Illuminating … wise and inspiring’ — Art Quarterly
‘A revelation … brilliant … a fascinating record of a life in art’ — RA Magazine
‘Craig-Martin is the artist-teacher par excellence … On Being an Artist is an engaging book and a useful reminder of the benefits of a life enriched by art and teaching.’ —Visual Culture in Britain
‘Written with force and intelligence … so clear, concise and coherent that we can have no doubt how much, and how well, students will have learned from him’ — Irish Arts Review
‘[Craig-Martin is] a splendid writer, humane, amusing and informative. This is a handsome, wise and often funny book, open and honest about his own life, and interested in the life and work of others.’ — Arts Journal
‘Full of stimulating and often unexpected insights into the contemporary art world, teaching and the practice of art … He writes with an elegant simplicity – totally jargon-free – and is a delight to read. He does much to enliven the ways in which the layman might think about art, and makes the reader not only think, but look – and see.’ — Burlington Magazine
‘An essential read’ — Wallpaper*
‘Only intermittently interesting’ — New Statesman
_____________

Craig-Martin’s life has been as colourful and varied as his distinctive work. From an early childhood that took him from wartime Dublin to postwar Washington D.C. and Bogotà, and student life in New York and at Yale University, he has gone on to enjoy a successful international career, feted around the world with major exhibitions, high-profile commissions and numerous honours.

In On Being An Artist, Craig-Martin reflects with both wit and candour on the many people, ideas and events that have shaped his professional life. In a series of short and entertaining episodes, he recounts his time studying under the influence of legendary artist Josef Albers at Yale University School of Art alongside Chuck Close, Richard Serra and other soon-to-be-famous radicals; his memories of meeting personal heroes such as Andy Warhol, Jasper Johns and John Cage; his efforts to explain his art to a bewildered astrophysicist at high table at King’s College, Cambridge; his astonishment at seeing the house and art collection of Charles Saatchi for the first time; and his surreal experience of staking out Christine Keeler at the height of the Profumo scandal.

He recalls, too, his first tentative steps as a practising artist and emergence as a key figure of early conceptual art in Britain. He also looks back on his achievements as a teacher at Goldsmiths, where he nurtured two generations of students, among them Damien Hirst and Sarah Lucas, earning himself the sobriquet ‘the godfather of the YBAs’. As he considers the development of his own career and the evolution of the art world over the last half century, he offers the benefit of insights gained from his professional highs and lows, revealing the essential attributes and knowledge that one needs as an artist today. He also tackles controversial issues such as the fashionability of contemporary art, the enduring status of painting, the relevance of life drawing and practical skills, the qualities of art schools, the role of commercial dealers, the importance of speaking clearly about art, and the judgment of what is good and bad in art.

More than the life of one of the most creative minds of our age, On Being An Artist provides lesson after valuable lesson to anyone wishing to know what it means and what it takes to be an artist today.

Sir Michael Craig-Martin CBE, RA was born in Dublin in 1941. At the age of four, he moved with his family to the United States, where he was brought up and educated. Between 1961 and 1966, he studied at Yale School of Art and Architecture. He returned to Europe in the mid-1960s and was a key figure in the first generation of British conceptualists. As a tutor at Goldsmiths College in London from 1973 to 1988 and again from 1994 to 2000, he had a significant influence on two generations of young British artists. He has had major exhibitions and retrospectives at museums and galleries across the world, and has several permanent large-scale installations in Europe and Asia. In 1990, he was appointed a trustee of Tate Gallery; in 2001, he was awarded a CBE; in 2006, he was elected a Royal Academician; and in 2016, he was knighted by Her Majesty Queen Elizabeth II. His work is held in many international museum collections, including Tate, London; Musée National d’Art Moderne, Centre Georges Pompidou, Paris; National Gallery of Australia, Canberra; and Museum of Modern Art, New York. He was curator of the Royal Academy Summer Exhibition 2015.

It's Nice That extract