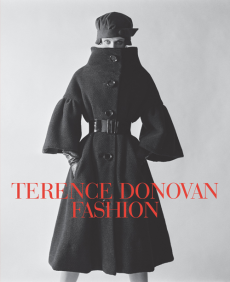 Terence Donovan was one of the foremost photographers of his generation – among the greatest Britain has ever produced. He came to prominence in London as part of a postwar renaissance in art, fashion, graphic design and photography. His working-class background and outlook helped change the face of British fashion photography and made him a major figure of London’s Swinging Sixties. A star in his own right, he was equally at home with celebrities and royalty as well as the ordinary girl on the street, whose mannerisms informed his photographs.

Gifted with an unerring eye for the iconic image, Donovan was also master of his craft, a technical genius who strove to push the limits of what was possible. And yet despite his fame and status, there has never been a publication devoted solely to his fashion work. Terence Donovan Fashion is the first time his fashion pictures have been collected together in book form.

Arranged chronologically, from the gritty monochromatic 1960s and 1970s to the vibrant and colourful 1980s and 1990s, the book reveals how constant invention and experimentation set Donovan apart from his contemporaries and influenced generations to come.

The pictures have been selected by his wife Diana Donovan and the former art director of Nova magazine and Pentagram partner David Hillman, who worked closely with Donovan for over a decade. With a text by the photographic historian Robin Muir, and a foreword by Grace Coddington, creative director of American Vogue, Terence Donovan Fashion is a landmark in the history of fashion photography.

‘A superb retrospective … Donovan is a “great”.… Just when you thought there could not possibly be space for another fashion book rooted in the 1960s, this one proves rather compelling.… The heavy paper and high quality reproduction rewards the viewer … a handsome posthumous monograph.’ — Observer

‘Make no mistake: This flawless volume is a love letter and a paean to a brilliant photographer … [a] rare opportunity to see what can only be deemed as a brilliant collection of timeless and classic photos of a caliber that is steadily dwindling … what a beautiful body of work. Mr Donovan left behind for us all to appreciate.’ — New York Journal of Books

‘Terence Donovan’s influence on fashion photography – and visual culture in general – can’t be underestimated.… Ushering in an era of experimentation and adventurousness, Donovan worked hard, combining huge technical proficiency and rigorous professionalism with a larger than life character. This monograph is the first full collection of his fashion work.’ — Wallpaper*

‘An impressive tome dedicated to one of the most prolific fashion photographers … Throughout the book, his obsessive approach to his craft is noticeable.… It is this high standard, page after page, which makes this a memorable publication.’ — Photomonitor

‘A stylish window onto a remarkable period of fashion history.’ — Sunday Telegraph, ‘Favourite Books of the Year’

‘His pictures will take you through the decades’ — The Times, ‘Favourite Fashion Books’

‘The best fashion photography book of the year’ — 20 Minutos

‘Terence Donovan redefined fashion photography.… It is hard to look at the sixties images in Terence Donovan Fashion and not be impressed. By their sense of nowness, by their casual brilliance. It is possible that nobody has ever done better.’ — Herald

‘[Donovan] changed the face of fashion photography during the Sixties.… If you need any further proof of the man’s reputation, note that the foreword was written by American Vogue creative director Grace Coddington. You don’t get a more stylish seal of approval than that.’
— GQ