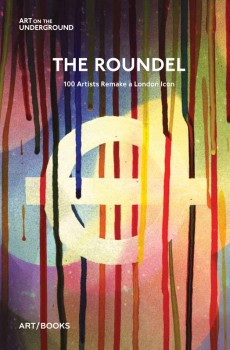 Marking the 150th anniversary of the birth of London Underground, the first ever subterranean railway, The Roundel presents the company’s famous logo rethought and refashioned by one hundred international artists. At once imaginative and playful, bold and irreverent, these new interpretations not only celebrate the symbol of London’s transport system, they also reinvent an icon of the city itself. Found the length and breadth of the metropolis, the century-old Roundel is one of the most effective, best known and most fondly regarded corporate logos in the world, spawning a host of similar designs in cities from Shanghai to Salt Lake City.

Now artists as diverse as Jeremy Deller, Sir Peter Blake, Roger Hiorns, Cornelia Parker, Yinka Shonibare, Gavin Turk, Susan Hiller and Richard Wentworth offer their personal take on the familiar motif, in photography or paint, drawing or print, collage or sculpture, revealing in their own words what inspired their creation. They follow in the footsteps of the many influential artists over the years, from Man Ray to Eduardo Paolozzi, who have taken the Roundel as a subject for their art, reflecting London’s importance as a capital city of culture.

With illuminating texts that consider the works within the history of transport design and public art, this gem of a book will delight all lovers of London and transport fanatics, as well as those who follow the latest trends in art, design and corporate branding.

Tamsin Dillon is Head of Art on the Underground.
Jonathan Glancey is an architectural critic and writer. He was architecture and design editor at the Guardian from 1997 to 2012.
Claire Dobbin is senior curator at London’s Transport Museum.
Sally Shaw is Head of Programmes at Modern Art Oxford.

‘Full of imaginative reworkings of the symbol which has had an impact on transport systems from Shanghai to Salt Lake City … an excellent new book’ — It’s Nice That (www.itsnicethat.com)

‘An affectionate mix of realistic and impressionistic ideas in painting, drawing, print and sculpture’ — Treehugger (www.treehugger.com)

Art on the Underground

It's Nice That preview