All works copyright © The Estate of Victor Willing 2019 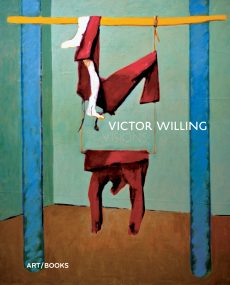 Victor Willing established his reputation as a painter while still a student at the Slade School of Art in London in the early 1950s. In 1955, just one year after graduating, he was the talk of the town, when he secured a solo exhibition at the prestigious Hanover Gallery, and important private and institutional collectors competed to buy his work. Recognizing Willing’s original talent, intellect, and status among his contemporaries, the influential art critic David Sylvester described him as the ‘spokesman of his generation’. Soon after, Willing left England to live in Portugal with fellow Slade alumnus and wife-to-be Paula Rego. The following two decades represented a period of creative block and personal setbacks. Willing struggled to produce new work, while Rego’s career blossomed. In 1966, he was diagnosed with multiple sclerosis, a degenerative disease that would lead to paralysis. In the mid-1970s, the family moved back to London and Willing returned to painting. Over the next ten years, he found acclaim once again, in particular for his dreamlike and hallucinatory imagery inspired by visions, as well as a personal iconography that in its childlike forms reached towards a new language of figuration.

Published to coincide with a major retrospective exhibition at Hastings Contemporary, this volume is the first monograph in two decades on this brilliant, ground-breaking, but overlooked painter, who has been described by Nicholas Serota as someone who burned the brightest in a bright generation, and whose paintings ‘continue to demonstrate that this was no shooting star, but rather a fiery comet which would eventually guide us all’. The book covers each decade of his tumultuous life, from his time at the Slade, his years in Portugal, his return to London in the 1970s, and his untimely death in 1988 at the age of sixty. It presents work from all aspects of Willing’s practice, including painting, drawing, and sculpture. A text by his close friend and long-time admirer, the critic John McEwen, illustrated by works and unseen material from the family archive, considers each phase of his career, including the darker periods of artistic and emotional difficulty, while a conversation between the artist and McEwen reveals details about the genesis and significance of all the key works.

Elizabeth Gilmore is the director of Hastings Contemporary.

John McEwen is a writer and art critic. He has written several monographs on British artists, including books on Paula Rego and Michael Sandle. He is the former art critic of the Spectator and the Sunday Telegraph, the London correspondent of Art in America, and an instigator of The Oldie.

Sir Nicholas Serota is the chair of Arts Council England and the former director of Tate.