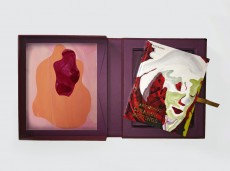 A special edition presented in a clothbound clamshell box with a unique collage hand made, painted and signed by the artist, limited to twenty copies and five artist's proofs

For images, please download the leaflet below. Email us for further details or to reserve a copy.

Clare Woods is internationally regarded as one of the most significant painters working today. Her highly colouristic paintings hover between abstraction and representation, expressing both a poetic romanticism and an unnerving psychic charge. This beautifully designed volume presents all the major works from her career to date, from small-scale intimate paintings in oil and enamel to ambitious public commissions and architectural projects. The dynamic layout of the book, with a varied mix of close-up details and installation shots, gives the reader a strong sense of the diverse scale and immersive, push-pull nature of the work. Five prominent writers consider various aspects of Woods’ practice, including her painting technique and use of photographic source material; her engagement with the traditions of landscape and figurative art; the influence of artistic forebears such as Francis Bacon, Barbara Hepworth, Graham Sutherland and Eduardo Paolozzi; and the connections between her life and work.

Michael Bracewell writes widely on modern and contemporary art and is a contributor to frieze, The Burlington and Parkett magazines. His recent publications include Richard Hamilton: Late Works (2012); Lucy McKenzie (2013); Damien Hirst: The Complete Psalm Paintings (2014); and Kai Althoff (2015). His selected writings on art, The Space Between, were published in 2012.

Rebecca Daniels is the art-historical researcher on the forthcoming Francis Bacon catalogue raisonné. She completed a doctorate on Walter Sickert at the University of Oxford, and while there catalogued the furniture collection in the Ashmolean Museum. She has published extensively on Sickert and Bacon and recently on Henri Matisse. She is a trustee of the Sidney Nolan Trust.

Jennifer Higgie is a writer living in London. She is co-editor of frieze and editor of frieze masters magazine. She has edited and contributed to many books on contemporary art, and her novel Bedlam, which she has recently adapted for the screen, was published in 2006.

Simon Martin is a writer, curator and art historian. He is the Artistic Director of Pallant House Gallery in Chichester, where he has curated many exhibitions of modern British and contemporary art. His publications include numerous catalogues and artist monographs, as well as Poets in the Landscape: The Romantic Spirit in British Art (2007) and Conflict and Conscience: British Artists and the Spanish Civil War (2014). He is a trustee of the Charleston Trust and HOUSE Festival, and a member of the Churches Conservation Trust Arts Advisory Panel and the Chichester Cathedral Fabric Advisory Committee.

Andrew Marr is an award-winning broadcaster, journalist and writer. After an extensive career in print journalism, he became the BBC’s political editor in 2000, a position he held for five years. He has written and presented several acclaimed television and radio series for the BBC. His many books include The Battle for Scotland (1992); Ruling Britannia (1996); The Day Britain Died (2000); A History of Modern Britain (2007); The Diamond Queen: Elizabeth II and Her People (2011); and A History of the World (2012).