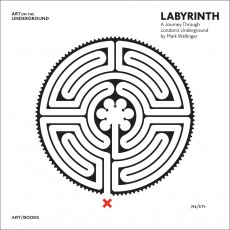 LIMITED EDITION
Edition of 270 specially bound copies, each with a unique bookplate, one per Underground station, signed by the artist, in a presentation box

To request further information or to reserve a copy, please email us

A Journey Through London’s Underground
by Mark Wallinger

Edited by Louise Coysh
With contributions by Tamsin Dillon, Will Self,
Mark Wallinger, Marina Warner and Christian Wolmar
Photographs by Thierry Bal
Design by Rose

London’s underground railways are an expression of the spread and diversity of the most international of capitals. Indeed, for many Londoners, the subterranean network is the very essence of the city, its arteries carrying the pulse of urban life from the heart of the metropolis out to its farthest extremities and beyond. How to capture that breadth in one work of art? How to celebrate a single system while also reflecting the millions of lives that it transports every day?

That was the challenge facing Turner Prize-winning artist Mark Wallinger. His response was to create a vast, permanent work of public art across the entire network, layered with rich cultural and historical references. In each of the Underground’s 270 stations, he placed a uniquely designed labyrinth, an ancient symbol representing spiritual and imaginative voyages akin to the countless circuitous journeys made on the Tube.

Designed by the award-winning studio Rose, Labyrinth: A Journey Through London’s Underground by Mark Wallinger is a compelling record of this extraordinary project. But more than that, it is also a vivid celebration of the London Underground and of London itself. Striking photographs of all the labyrinths in situ reveal the diverse face and fabric of the network and its users, while fascinating ‘I-never-knew-that’ facts about each station and their surrounds bring surprising perspectives to the daily commute.

Transport historian Christian Wolmar tells the story of the emergence and development of London’s subterranean rail network and the important role it has played in shaping the metropolis and those who live in it. Novelist Will Self responds to Wallinger’s piece with a personal reflection that takes us into the depths of memory and through the disorientating effects of urban life; while writer and academic Marina Warner, in conversation with the artist, explores the historical and mythological significance of the labyrinth and places the project in the context of Wallinger’s practice. Much more than a document of the creation of a work of art, this book is also a unique portrait of a system that keeps London going, the very lifeblood upon which it depends and thrives.

Published in association with Art on the Underground

Guardian film on the project