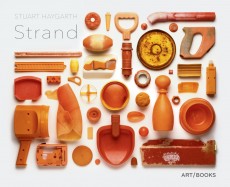 In February 2011, artist Stuart Haygarth did an unusual thing: he started to walk along the entire coast of southern England, with the goal of collecting every man-made item that he came across. He had a purpose in mind, for Haygarth gathers discarded or overlooked objects and elevates them into art, making exquisite artefacts and stunning installations out of common detritus and everyday waste. Yet his practice is as much about the process of collecting and collating materials as it is about the creation of value or beauty. For Strand – the Old English and German word for ‘beach’ – he walked from Gravesend to Land’s End and picked up the thousands of synthetic items left washed up on the shore. Combs, lighters and baby dolls, plastic balls, toys, containers and shoes were just some of the many objects he found on the 500-mile trip. Back in the studio, he categorized each one by type and colour before arranging them into precise compositions and photographing them.

Displaying the formal rigour of the designer and the aesthetic eye of the artist, the resulting images seduce with their beauty and visual immediacy. The objects form an archive of sorts, a fragmented narrative of unknown people’s lives, as well as a material document of Haygarth’s journey. But his beautiful pictures tell another tale too: the story of our reckless pollution of the environment, for each of these manufactured objects has been thrown away and carried by the world’s oceans and seas. They are the flotsam and jetsam of daily life.

Award-winning academic and nature writer Robert Macfarlane considers the photographs of Strand as evidence of our pollution of the planet with ever-growing mountains of plastic waste, while Deyan Sudjic, director of the Design Museum, discusses Haygarth’s work as part of the tradition of artists, including Marcel Duchamp, Andy Warhol and Joseph Cornell, who collected found objects in order to make art.

Stuart Haygarth is an award-winning British artist and designer. Originally trained as an illustrator and photographer, he began to make art works from found and collected objects in 2004. Since then, he has had numerous exhibitions and commissions in the United Kingdom, United States, France, Italy, Germany and Japan. He has won design awards from Wallpaper*, Arena and Elle Décor magazines. He is represented by Carpenters Workshop Gallery in London, Paris and New York, and his works have appeared in the Venice Biennale and Design Miami.

Robert Macfarlane is the author of a series of award-winning and internationally best-selling books about landscape, imagination and nature, including Mountains of the Mind (2003), The Wild Places (2007), The Old Ways (2012) and Landmarks (2015). His essays and articles have appeared in venues including Granta, the New York Times, and the Guardian, and his work has been widely adapted for television, film and radio. He is a Fellow of Emmanuel College, Cambridge, and a Fellow of the Royal Society of Literature.

Deyan Sudjic is the director of the Design Museum in London. His career has spanned journalism, teaching and writing. He was director of Glasgow UK City of Architecture in 1999, and in 2002 he was the director of the Venice Architecture Biennale. He was editor of Domus magazine from 2000 to 2004, and was founding editor of Blueprint magazine from 1983 to 1996. Sudjic has published many books on design and architecture, including, most recently, B is for Bauhaus (2014).