All works from The Many Faces of Jonathan Yeo. Copyright © 2013 the artist 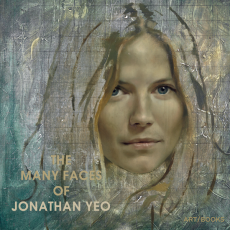 Jonathan Yeo is one of Britain’s best-known portrait painters. Over more than a decade, he has gained an international reputation for painting some of the most famous faces of our age. Models and movie stars, artists and actors, politicians and princes – all have been the subject of his iconic, and often ironic, portraits. Nicole Kidman, Dennis Hopper, Kevin Spacey, Stephen Fry, Damien Hirst, Sienna Miller, Rupert Murdoch, Grayson Perry, Tony Blair and Prince Philip are just a selection of the many household names who have sat for Yeo. Renowned for his distinctive, highly figurative canvases and controversial collages, he employs a range of media and techniques to create a diverse body of work that expands the traditions of portraiture while examining contemporary perceptions of beauty, celebrity and power.

Coinciding with a retrospective exhibition at London’s National Portrait Gallery, The Many Faces of Jonathan Yeo is the first major publication on the artist. Featuring his most popular paintings, drawings, collages and prints, the book also presents several new important canvases never seen before. Alongside his intimate portraits of well-known sitters are dramatic and unsettling studies of cosmetic-surgery patients that document the compulsive and painful pursuit of physical perfection.

Photographs of the studio and works in progress reveal Yeo’s practice, while contributions from his subjects lift the lid on what it is like to be scrutinized by his exacting, forensic eye and to have oneself captured on canvas for ever. Martin Gayford discusses Yeo’s practice within the traditions of portraiture and compares the experience of being painted by him with that of sitting for Lucian Freud; Giles Coren offers revealing insights from the perspective of close personal friend and contemporary; Tim Marlow interprets the significance of Yeo’s political portraits; while a wide-ranging interview with Sarah Howgate, curator of the National Portrait Gallery show, considers the genesis of Yeo’s work and the relationships with his subjects. More than a monograph on a single artist, this book is also an enlightening exploration of the state of portraiture today, giving an insight into the risks faced by both portraitist and sitter.

Martin Gayford has been art critic for the Spectator and the Sunday Telegraph and is currently chief art critic for Bloomberg News. He is the author of The Yellow House: Van Gogh, Gauguin and Nine Turbulent Weeks in Arles, Constable in Love: Love, Landscape, Money and the Making of a Great Painter, Man with a Blue Scarf: On Sitting for a Portrait by Lucian Freud and A Bigger Message: Conversations with David Hockney.

Giles Coren is a writer, food critic and television presenter. He has been a columnist for The Times since 1993 and was named ‘Food and Drink Writer of the Year’ in 2005. He is the author of How to Eat Out, Anger Management for Beginners and the novel Winkler.

Tim Marlow is a writer, broadcaster, art historian and director of artistic programmes at the Royal Academy of Arts, London. The former director of exhibitions at White Cube, he has presented numerous television and radio programmes and has written for many newspapers and periodicals. His books include studies of Auguste Rodin and Egon Schiele.

CNN Ones to Watch (3 parts)