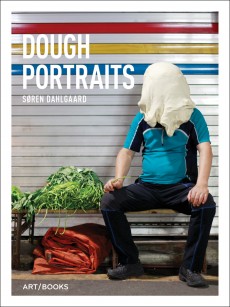 ‘Here’s an artist who does things a little differently – and his perversely brilliant work is all the better for it’ – We Heart
‘Dahlgaard upturns portraiture by taking away that crucial indicator of race, age, gender and, more subtly, character and culture: the face.’ — Sydney Morning Herald
‘Dahlgaard’s photographs are remarkably effective in their interrogation of portraiture, challenging our preconceptions about the relationships between artist, subject and viewer. [The] book documenting this ongoing project reveals the dough portraits as silly, sensitive, insightful and clever’ — The Arts Desk
‘Rich … full of insights’ — Weekendavisen
‘A pleasure walk through this highly alternative portraiture’ — Kunsten.nu
‘Coming across Danish artist Søren Dahlgaard’s series of Dough Portraits is like one of those moments where the skies open, sunlight beams down upon us, and the opera “aahh’s” chime in’ – Lost at E Minor
_____________

This visually stunning, hilarious and outlandish book presents Danish performance and conceptual artist Søren Dahlgaard’s ongoing series of Dough Portraits, in which he creates absurdist portraits of people with their heads encased in dough. Invited by art galleries, museums, biennales and institutions from all over the world to undertake commissions, he has photographed more than two thousand sitters of all ages and backgrounds in diverse settings in countries as far afield as Canada and the United States, Denmark, Brazil, the Maldives, Finland, Kosovo, China, South Korea and Australia. Collaboration, process and performance are as much elements of the work as the finished image itself, with each participant ‘co-creating’ their own portrait, first by kneading the dough, then by placing it on their head, and then by carefully selecting a pose – all before of an audience of amused or bemused onlookers. As a result, while their faces might be covered, their individual personalities shine through, these sticky lumpen masks revealing as much as they conceal. Humorous and ridiculous as the pictures are, they also carry a darker sense of the uncanny and the sinister. They also allude to the ways we define ourselves and express our own unique identities, as well how we measure the stranger in an age when the covered face is so contested politically and ethically.

Selected portraits from all the main projects in the series are reproduced in colourful splendour and surreal detail, alongside photos and video stills of the shoots as they took place. Commentaries by some of those who commissioned the work, as well as others who were smothered in dough and then photographed or who merely witnessed the events unfold, recount their experiences and reflect on the aesthetic, ethical and social issues raised by Dahlgaard’s transformation of this everyday and universal material into the stuff of art.