All images by Carton Moore Park from Elfin Rhymes 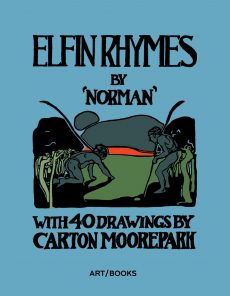 This charming children’s book, written by an anonymous author known only as ‘Norman’ and first published in 1900, features eleven rhymes that capture the mysterious and sometimes ridiculous world of goblins, witches and fairies. Children and parents alike will delight at these stories of naughty imps and elves who love to play pranks, tease and make mischief on humans, animals and one another. And while few of these fairy tales have a happy ending, all of them offer the reader a moral lesson of sorts. Each verse is accompanied by several drawings by illustrator Carton Moore Park in either one, two or three simple colours in a style that not only conveys the magic of the fairy-realm, but also is strikingly modern in character. This facsimile edition is beautifully printed on high-quality paper to create a collectible object that recipients young and old will treasure long into adulthood. It is the latest volume in a series of special facsimiles of historic illustrated children’s titles selected and produced by Art / Books.

Carton Moore Park (1877–1956) was a British painter, illustrator and teacher, born in Scotland. He studies at the Glasgow School of Art between 1893 and 1897. During the 1890s, he was best known for his illustrations of animals, which appeared in Glasgow Weekly Citizen and Saint Mungo. His illustrated books were Alphabet of Animals, Book of Birds, and A Book of Elfin Rhymes. He lived in London until 1910, when he emigrated to New York, where he spent the rest of his life.