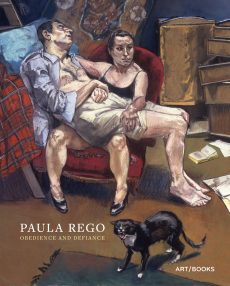 On the cover: Paula Rego, The Shipwreck (detail), right-hand panel of
The Betrothal; Lessons; The Shipwreck, after ‘Marriage à la Mode’ by Hogarth, 1999

‘An unmissable, lifetime-spanning survey – ★★★★★’ — Guardian
‘Unmistakable, unignorable and unmissable – ★★★★★’ — Times
‘Remarkable and powerful’ – Spectator
‘Paint and power, the personal and political, inseparable and incendiary in every work: that is the hard punch delivered by [the] magnificent, important Paula Rego: Obedience and Defiance’ — Financial Times
‘Provides a welcome addition to the growing library of works on Paula Rego, one of the most important figurative artists working today … Paula Rego: Obedience and Defiance unsettles the dominant narrative according to which Rego’s paintings, prints and drawings are primarily seen as illustrations of her personal story.… Lampert’s insightful essay makes connections across periods and styles of Rego’s work to identify recurrent themes, such as power, control and role playing, highlighting the artist’s willingness to respond to contemporary political issues, particularly those that impact the lives of women. The catalogue provides commentary on each of the works, each beautifully illustrated.’ — Print Quarterly

Born in Lisbon in 1935, Dame Paula Rego DBE RA is celebrated for her bold and intense paintings, drawings, and prints, which intertwine the private and the public, the intimate and the political, the real and the imagined, combining autobiographical elements with stories from literature, folklore, and mythology, references to earlier art, and observations on the contemporary world. She uses arresting imagery and dark symbolism to create unsettling narrative tableaux that challenge the established order and unpick social and sexual codes embodied by family, religion, and the state. Charged with a unique psychic and emotional drama and magical realism, her works express what it is to be human – and a woman in particular – and living under the oppressive hierarchies and domination of patriarchal society.

This book, the first comprehensive study of the work of Paula Rego in more than fifteen years, accompanies a major touring exhibition that brings together paintings, drawings, and prints spanning the artist’s career from the 1960s to the present day. It focuses on work that addresses the moral challenges to humanity, particularly in the face of violence, poverty, political tyranny, gender discrimination, and grief. The selected pictures, which include previously unseen paintings and works on paper from the artist’s family and close friends, reflect Rego’s perspective as an empathetic, courageous woman and a defender of justice. The book includes a substantial text by exhibition curator Catherine Lampert that considers Rego’s oeuvre as a whole and draws upon the artist’s own interpretations and revelations about her practice, commentaries on the individual works, and a personal appreciation of the artist’s achievements by the acclaimed American writer Kate Zambreno.

Catherine Lampert is an independent British curator and art historian. She has curated numerous exhibitions at the Hayward Gallery, the Whitechapel Gallery, where she was director from 1988 to 2001, and more recently the Royal Academy of Arts, Tate Britain, the Kunstmuseum Bonn, and MUAC in Mexico City. She has been a friend of Paula Rego’s since the late 1970s.

Kate Zambreno is an American novelist and essayist whose work challenges genre and frequently engages with and is inspired by visual art. She is the author of six books, most recently Appendix Project, a collection of talks and essays dealing with grief, time, and philosophy, and Screen Tests, a collection of shorts and art essays. She lives in New York.