All images from The Art of Aubrey Beardsley 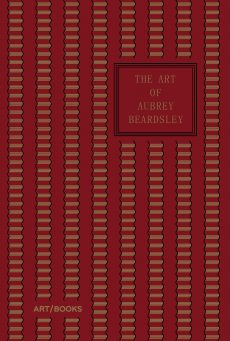 Preface and introduction by Arthur Symons

Published twenty years after he died, The Art of Aubrey Beardsley presented sixty-four of his works in an intimate pocket-sized edition. With a personal memoir and critical appreciation by the poet and editor Arthur Symons, written upon the death of his friend and collaborator, it was the definitive word on the provocative artist’s seductive and individual art, the text becoming a collectors’ item that was privately printed until being published for a wider audience. This centenary facsimile edition faithfully reproduces the pages of the 1918 volume, presented in a special cloth binding with a black-and-gold motif adapted from one of Beardsley’s own designs for a book cover. A perfect gift for any Beardsley enthusiast, this book will also appeal to anyone interested in the fin de siècle era and the beginnings of modern graphic art.

Aubrey Vincent Beardsley (1872–98) was born in Brighton on 21 August 1872. By the age of seven, he was showing signs of the tuberculosis that would eventually kill him. From 1891 to 1892, he took evening classes at the Westminster School of Art, the only formal artistic training he ever received. That year, he visited Paris and discovered the work of Toulouse-Lautrec and Japanese prints, both of which influenced his own style. In 1893, he received his first commission, to illustrate Sir Thomas Malory’s Le Morte d’Arthur. Over the next six years, he completed numerous projects, including illustrations for editions of Aristophanes’ Lysistrata and The Rape of the Lock by Alexander Pope, and drawings for Oscar Wilde’s play Salome. He also co-founded the literary magazines the Yellow Book and the Savoy. By 1897, his health was deteriorating, prompting a move to Menton on the French Riviera, where he died on 16 March 1898.

Arthur Symons (1865–1945) was a British poet, critic and magazine editor and one of the key exponents of Symbolism in Britain. He contributed poems and essays to the illustrated quarterly literary periodical the Yellow Book, whose principal illustrator and first art editor was Aubrey Beardsley. From late 1895 through 1896 Symons edited, along with Beardsley and Leonard Smithers, The Savoy, a short-lived magazine of literature, art, and criticism whose contributors included Yeats, George Bernard Shaw, and Joseph Conrad. Until he suffered a breakdown in 1909, Symons wrote numerous volumes of verse, plays, and essays, including the important The Symbolist Movement in Literature, which would have a major influence on W. B. Yeats and T. S. Eliot.